Leigh Bowery & A Bottle of 7Up

Leigh Bowery & A Bottle of 7UP

As part of Fleisher/Ollman’s ongoing exploration of contemporary self-taught art, we proudly present drawings by artists from Artworks. Artworks is the artist-focused arm of Community Integrated Services (CIS), a Philadelphia-area program that empowers people with disabilities through employment opportunities that foster self-sustainability, equality, and community. Exhibiting artists are all based in Philadelphia. Leigh Bowery & A Bottle of 7UP is the title of a drawing by Anthony Coleman featured in the exhibition based on his interpretation of an image of Leigh Bowery, the renowned Australian performance artist, costume designer, Lucien Freud portrait sitter, and club promoter, oddly juxtaposed with the popular soft drink. Coleman’s utter transformation of subject-matter speaks to his—and many of the artists in the exhibition—zeal to recast popular culture imagery into something uniquely their own.

Anthony Coleman (b. 1969) transmogrifies a range of cartoon characters, clowns, celebrities, and everyday people in colored pencil, graphite, and ink drawings. Signature Coleman motifs include triangulated heads; winged ears and angular elements that emanate from heads and bodies; and re-occurring proboscis-like noses. All of his drawings incorporate a vibrant color palette. Never one to back down from on-the-spot portraits, Coleman often draws sitters at his opening receptions, surprising patrons with images that transcend any notion of traditional likeness. Coleman has had solo exhibitions at Space 1026, Philadelphia; Dale Zine, Miami, FL; and SAGE Studio, Austin, TX. He has been featured in numerous group shows in Philadelphia.

Like other artists included in the exhibition, Bayath Ham (b. 1993) depicts actors, prominent cultural figures, hip-hop stars, musicians, and video game characters. Utilizing ultra-thin, black ink pens, Ham distills images sourced from the Internet into sparsely minimalist compositions. In several drawings, he uses an interesting technique whereby figures occupy the lower edge of the paper or are piled up to mountain-like effect in the central area of the sheet surrounded by blank space, creating a stark effect. Ham had a solo exhibition at Gallery Aferro, Newark, NJ in 2017. He has been in group exhibitions at Savery, Eyes, and Off the Wall galleries, all in Philadelphia; and SAGE Studio, Austin, TX.

Christian Hayes (b. 1998) is obsessed with the Philadelphia 76ers, including their mascot and logos; Chuck E. Cheese; and a host of cartoon characters. Chuck E. Cheese is the brand name and cartoon personality of the children’s pizza restaurant and entertainment center where Hayes is a star employee. In one resonant drawing, a banquet table is arranged with Chuck E. Cheese menu items, with the namesake character at center offering a pizza to guests who have yet to enter the picture. Could they be the 76ers? If Christian is working tonight he will be sure to meet his heroes. This is Hayes’s first gallery exhibition.

Chantal Bobo Peden (b. 1994) is inspired by fashion and celebrity culture, but how she goes about visualizing her enthusiasms takes us on sideroads through colorful abstraction, oddly imagined figuration, and enigmatic forms. The shards of color she employs in her work evoke stained-glass window design and also the colorful paintings of the 1920s and 30s, both abstract and representational, by artists as diverse as Pablo Picasso, Stuart Davis, and Paul Klee. Many of her drawings form the basis for silkscreened accessories and home goods products. Peden has shown in group exhibitions at Savery and Eyes galleries in Philadelphia.

Woodley White (b. 1983) is attracted to the details, forms, and colors of his everyday environment. Using colored pencil, crayon, and graphite, White painstakingly draws striped and patterned t-shirts, train interiors and subway platforms, bathroom floor tiles, colorful yarn spools, and vending machines, among other subjects. Sometimes his vision, as in the case of his public transit drawings, verges on the sensibility of a technical designer or architect; at other moments White elongates or widens t-shirts and limousines to comic proportions. White’s keen interest in detail is equally matched by repetition—the artist is known to draw variations on a subject hundreds of times before moving on to a new body of work. He often signs his drawings with a repeated +. White has had solo exhibitions at SAGE Studio, Austin, TX and Gallery Aferro, Newark, NJ. He has been in several group shows in Philadelphia at venues including High5 Gallery, AIRSPACE, and Savery Gallery. He has shown internationally at Arts Project Australia, Melbourne.

Like several of her colleagues at Artworks/CIS, Jennifer Williams (b. 1982) enjoys drawing the famous: supermodels on the red carpet, musicians, and artists. But the way she depicts them is strikingly original. Rather than basing her work on media images, she invents her own compositional devices in which her subjects are usually lined up and stare directly at the viewer in frontal orientation. Hands on hips, her supermodels’ arms form repeated triangular shapes and teeter on high-heel shoes. Last year, Williams embarked on creating a brand identity for an imaginary all-girl punk band, The Raven Call, through hand-drawn t-shirts. Commissioned t-shirts are another avenue of creativity for Williams. Williams has shown in group exhibitions at SAGE Studios, Austin, TX and is a member of Soapbox Community Print Shop and Zine Library, Philadelphia.

Extraordinary icons, ‘Leigh Bowery & A Bottle of 7UP’ at Fleisher Ollman Gallery 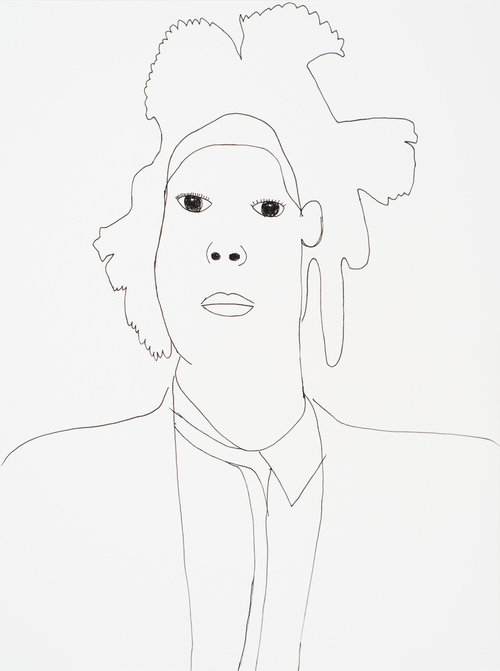