Luis Romero studied philosophy at Boston University and art under Ray Yoshida at the Art Institute of Chicago. His work deals almost exclusively with the relationships between line and three-dimensional paper constructions, and his models, scrolls, sculptures, and drawings often share linguistic and philosophical underpinnings. His work has been exhibited internationally.

Luis Romero at the Drawing Center 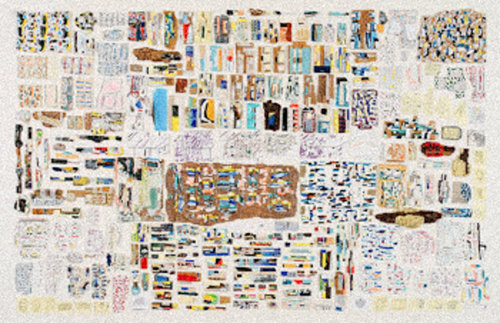 Luis Romero's obsessively constructed and painted paper assemblages and quirky line drawings easily could lead you to believe he's a self-taught artist. That, and the fact that he's showing his works at the Fleisher/Ollman Gallery, which besides showing contemporary artists has a long history of introducing the efforts of the un-art-schooled, makes that possibility seem all the more likely.

In fact, Romero has spent more time in school than out of it. A Puerto Rican who lives in Chicago, he has a degree in philosophy, literature, and film from Boston University; a certificate from the National School of Plastic Arts (Escuela Nacional de Artes Plasticas) in Mexico City; and an M.F.A. in painting and drawing from the School of the Art Institute of Chicago.

Romero's paper assemblages take up most of his show and are the work you see first as you enter the main gallery. They're made up of multiple torn pieces of paper that he paints, then staples together to form rough grid patterns. As busy and childlike as this mode of construction sounds, it results in surprisingly elegant, bold geometry.

His abstract line drawings, on the other hand, bring to mind the contours of pre-Columbian Mexican pottery, as well as the stylized, repetitive shapes common to the paintings of Chicago imagists Roger Brown, Christina Ramberg, and Jim Nutt.

Having seen Romero's work in two group shows here, I would not have imagined it in a show of the scale he now has - his pieces are generally small and would seem ideally suited to an intimate box of a gallery - but his percolating grids take over Fleisher/Ollman's wide-open main space as if they were made to be there.

Represented by a selection of collages in Fleisher/Ollman's small gallery is Ray Yoshida, a Chicago imagist who counseled countless students during his decades as a painting professor at SAIC (Romero was one, as were Roger Brown, Elizabeth Murray, Robert Storr, and many others, myself included). He also was a master of the seemingly passing enigmatic observation that would leave a student desperately guessing at its real meaning. Yoshida's collages of images, cut from comic books and glued to paper in tidy grids, are as mysteriously witty as he was, an invitation to an inscrutable code that would never be cracked. 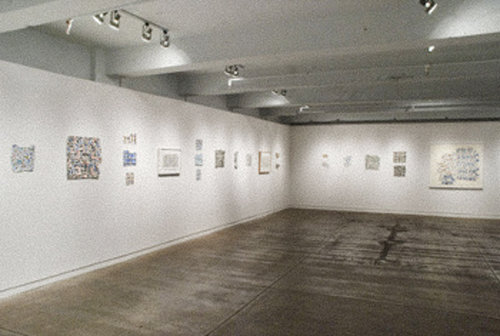