Fleisher/Ollman presents a two-person exhibition featuring the work of Kate Abercrombie and Trevor Winkfield, artists from different generations and backgrounds, who both employ collage in the creation of highly colorful, enigmatic paintings. Abercrombie incorporates a wide array of images scavenged from mediated visual culture (the internet, newspaper and magazine clippings) as well as depictions of objects she lives with. She photocopies, draws, and traces her source material into template drawings, which she transposes onto artist’s paper and infills with her signature medium, gouache. Winkfield’s collage-as-precursor-to painting approach begins with paintings and drawings on paper, which he cuts out and overlays on colored paper backgrounds. He then traces the collage studies onto canvas and paints them in acrylic.

Aside from collage as foundational backstory, collage plays a prominent role in how we view the final works. With Abercrombie, collage is suggested in the juxtaposition of her imagery, which is often pronounced through riots of competing patterns. With Winkfield, a collage-like effect is achieved not by complexity, but by the simple delineation of planes of color in conversation with one another. Both artists share similar formal grounding as they adroitly play with the symbiosis between abstraction and representation. Both also evoke the still-life tradition in focusing on the objects and ephemera of domestic space.

Despite such affinities, however, the two artists differ remarkably in the final instance. Abercrombie is an autobiographical painter, representing objects and images culled from daily life in a style at times recalling 19th century American trompe l’oeil artists. Her latest body of work touches upon superstition and the dreamworld commingling with the familiar and the uncanny. In contrast to Abercrombie, Winkfield delves into Dada-inspired fantasy with little interest in representing the world that we know. While recognizable objects and figures emerge from his paintings, they have been transformed to such a degree that they become alien—automatons, machines, hybrid things that are not of our world.

Kate Abercrombie has long explored the convergence of popular culture and the self, interweaving personal and family narratives with contemporary and historical imagery. The process of transposing appropriated images into highly-rendered paintings breathes life into her compositions that regular collage cannot achieve. The resulting works subvert our expectations regarding medium, style, period, and technique in painting and drawing. In the past, her work has brought to mind modernist abstraction including Cubism, Futurism, and American Precisionism. Her latest paintings move away from these touchstones and travel back to earlier art historical predecessors—trompe l’oeil artists such as John Peto and William Harnett. While wildly disparate at first glance, Abercrombie, Winkfield and these fool-the-eye painters all share an affinity for creating complex microworlds. Here, Abercrombie evokes a subtle supernaturalism as to make meaning of events seemingly out of her control by creating images that both reflect and and navigate uncertainty: a roulette wheel, the Welsh patron saint of lovers and attendant myths regarding the longevity of relationships, ouija boards, dreambooks (books used to assign specific numbers to dreams that are then used to play the lottery), lottery tickets, all-seeing eyes, numbers, and recipes and newspaper clippings passed down from deceased loved ones all make appearances in Abercrombie’s new paintings.

During his youth in the 1950s, Winkfield made pilgrimages to view art in and around his native Leeds, England. Such adventuring took him to Kurt Schwitters’ Merzbarn in the Lake District, a Francis Bacon exhibition, and various Medieval churches. From Schwitters he learned about the idea that one could literally enter a work of art, something Winkfield would later conceptually strive for in his paintings of “self-contained worlds.” Bacon taught him the possibility of radical figuration. And the graphic, delineated, vibrant color and forms of Winkfield’s paintings are indebted to his early enthusiasm for heraldry and stained glass windows, which he was drawn to for their polychromy and flatness (counterbalancing the grayness and austerity of post-World War II Britain). When he graduated art school in the mid-1960s, Winkfield put painting on hold and worked as an independent, avant-garde publisher. Settling in New York in 1969, he eventually began painting again, invigorated by the work of Raymond Roussel, a French writer whose phonetic and semantic word play served as a foundation for Winkfield’s paintings. In this regard, Winkfield is an heir to Surrealist juxtaposition, the arcana of Marcel Duchamp, and the neo-Dada wit of Jasper Johns. Winkfield’s beehives, hybrid figures (human, animal, alien, machine), and butter churns all resonate with Duchamp’s exploration of automatons and machines (think the bride and bachelors of The Large Glass or Duchamp’s paintings of chocolate grinders).

Kate Abercrombie (born 1978, lives and works in Philadelphia, PA) has an MFA from University of Texas at Austin and a BFA from Tyler School of Art, Temple University, Philadelphia. She has been included in exhibitions in Philadelphia at the Pennsylvania Academy of the Fine Arts, Institute of Contemporary Art, Philadelphia Museum of Art, Vox Populi, Fleisher/Ollman, Little Berlin, and Black Floor. She has also shown at the Creative Research Laboratory, Austin, TX. In 2005, she received an Independence Foundation Fellowship in the Arts. In 2009, she was awarded a residency at the Vermont Studio Center, Johnson, VT. Her work is in the collections of the Philadelphia Museum of Art, the Pennsylvania Academy of the Fine Arts, and the Fabric Workshop and Museum.

Trevor Winkfield (born 1944, lives and works in New York, NY) received an Intermediate Certificate in Art from Leeds College of Art followed by an M.A. at the Royal College of Art in London. He has been the recipient of awards from Yaddo, Pollock-Krasner Foundation, the American Academy of Arts and Letters, and a Purchase Prize as well as a Chevalier in l’Ordre des Arts et des Lettres from the French government. Winkfield has had solo exhibitions at Tibor de Nagy, Poets House, Barbara Allen Gallery, Edward Thorp, and Fischbach Gallery (all in New York, NY); he has had solo museum shows at the Erie Art Museum, Erie, PA and Institute of Contemporary Art, Boston, MA. His work is in the collections of the Berkeley Art Museum, CA; Philadelphia Museum of Art; and the Museum of Modern Art, New York, NY, among others.

Press for Collage as Painting [Hyperallergic]

“Conjuring the Demons and Mysteries of Society through Painting” 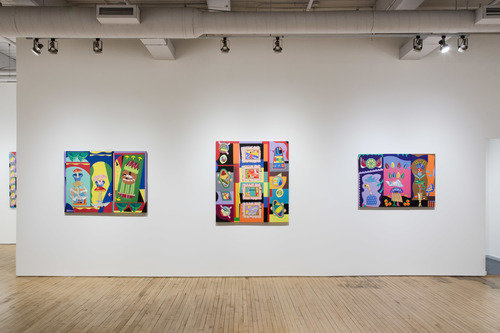 “Like a perfectly matched duet; In ‘Collage as Painting’ at Fleisher/Ollman, two artists’ works are a study in synchronicity”