Painters Sculpting/Sculptors Painting presents a multigenerational group of artists who prompt us to think about painting as an experience in space, while also revealing how three-dimensional objects can take on attributes of painting. This exhibition considers the literal and conceptual ramifications of the binary, painters sculpting/sculptors painting, bearing in mind observations regarding a selected contingent of four artists working in the Philadelphia area who:

1) transcend the usual expectations of what paintings are by making paintings freed from gallery walls, inhabiting space by means of free standing armatures and wooden bases (Dona Nelson); or create paintings whose supports are anchored at specific points to gallery architecture and drape in space (Matt Jacobs).

2) are better recognized as sculptors, but who also make paintings so thoroughly impastoed that they verge on sculpture; or, conversely, make sculptures that take on attributes of painting, such as in their use of color and relationship to the wall (Marc Zajack).

3) create hybrid objects that are sculptures foremost, but whose attention to the application of color pushes them toward painting (Nadine Beauharnois).

For several decades, Dona Nelson has been wrestling with the very notion of what painting is by ranging across abstraction and representation, thinking critically about painting's materiality and media, expanding its potential as a two-sided practice, and, leading from this notion, exploring its three-dimensional possibilities. Nelson shares a lineage with a long line of artists including Robert Rauschenberg, Robert Ryman, and Sigmar Polke, all of whom have thoughtfully considered painting's relationship to space. But the manner in which she revels in color; uses unusual materials as stand-ins for paint (like stiffened cheesecloth, string, and yarn); and the way she vigorously adds and subtracts media from the canvas, incorporating traces of this process in the final instance, makes her a unique figure in contemporary art. Over the past year, Nelson has been exploring yet another avenue to present paintings as sculptures: freestanding paintings anchored to wooden supports—works she calls "box constructions." These hybrid objects encompass two freestanding, two-sided paintings in dialogue with each other. Dispensing with the metal armatures and using raw wooden supports instead, the box constructions evoke theatrical props, but unlike props—which are designed to be seen from afar—these works require careful viewing as they are, in essence, four paintings.

Matt Jacobs explores the exchange between painting and sculpture, intentionality and chance. For Painters Sculpting/Sculptors Painting, Jacobs will install a dyed silk organza painting partially adhered to the wall, and then draped from wall to column, presenting the idea of a painting as both fixed and untethered, existing in both dimensions simultaneously. A former student of Dona Nelson, Jacobs has also used metal armatures to support paintings in space. The misty fades of color and the supple, diaphanous quality of the silk create an ephemeral quality, making Jacob's work distinct from Nelson's "painting as thing" sensibility. Jacobs' monoprints, also featured in the exhibition, are by-products of the spray-dye process he uses to paint silk. The plastic sheeting Jacobs employs in his studio as a protective barrier is recycled to make prints. Running the paint-covered plastic through a printing press, Jacobs creates readymade abstractions from studio detritus that are directly related to the silk paintings, as they incorporate the same pigment. Jacobs' work not only relates to Nelson's, but resonates with artists who have explored the supple and multidimensional aspects of painting, including Sam Gilliam and Katharina Grosse, respectively.

Nadine Beauharnois' papier mâché and polymer clay sculptures resemble three-dimensional paintings in the manner in which the artist pays close attention to their exuberant polychromy realized in oil and acrylic. Biomorphic in shape, her objects have an animated quality that bring to mind otherworldly creatures, bodily organs, orifices, and umbilical cords. The sculptures' visceral qualities in high-key colors evoke Eva Hesse's mid-1960s umbilical bas-relief paintings. Apropos of Painters Sculpting/Sculptors Painting, Hesse was a painter who sculpted, later dispensing with applied color nearly entirely. The intimacy, scale, and color of, and somatic and erotic references in Beauharnois' work also find good company in the ceramics of Ron Nagle and Kathy Butterly.

Marc Zajack is best known as a sculptor whose small-scale, kinetic objects from the IED Series were one of the highlights of the 2014 Philadelphia survey exhibition, Begin Where You Are at Crane Arts. However, Zajack also makes thick, gooey paintings that verge on becoming encrusted objects. Seemingly experiments in density and layering, the titles of the paintings hint at imagery decipherable with a bit of digging: sad clowns, clothed limbs, rollerskates, and bicycle parts eventually emerge from painterly occlusion. Zajack's entombed forms veiled in globs of paint recall the 1950s paintings of Asger Jorn, who also buried figures within an abstract morass. Synthesizing the density of his paintings with the kinetic simplicity of his IED sculptures, Zajack also presents a new, wall-based, circular sculpture composed of a jungle of plastic flowers and foliage, set in motion by a small motor.

Dona Nelson (b. 1947) attended the Whitney Independent Study Program and earned her BFA from Ohio State University. She has had solo shows at galleries and museums including Thomas Erben, Michael Klein, Rosa Esman, and Cheim & Read (all in New York); the Weatherspoon Art Gallery, Greensboro, NC; the Pennsylvania Academy of the Fine Arts, Philadelphia, PA; and Boston University Art Gallery, Boston, MA. She has been included in group exhibitions at venues such as Harris Lieberman, D'Amelio Terras, Mary Boone, 80WSE at New York University (all in New York, NY); the Contemporary Arts Museum, Houston, TX; Aldrich Museum, Ridgefield, CT; and the Rose Art Museum, Brandeis University, Waltham, MA. She was featured in the 2014 Whitney Biennial. Her work is the collections of the Metropolitan Museum of Art, NY; the Solomon R. Guggenheim Museum, NY; and the Pennsylvania Academy of the FIne Arts. She was a 2011 Foundation for Contemporary Arts grant recipient and she received a Guggenheim Fellowship in 1994. Nelson is a Professor of Painting and Drawing at Tyler School of Art, Temple University, Philadelphia, PA. 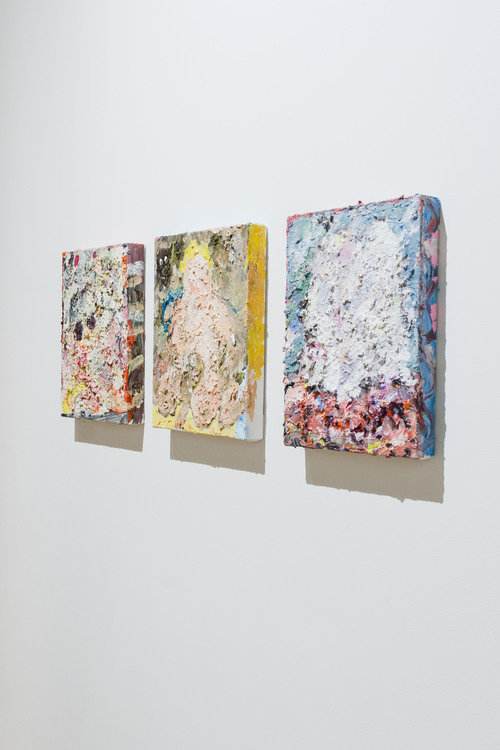