or make an appointment

In The Yellow Drawings, Mark Mahosky explores the Gettysburg Civil War battlefield as a site of memory and memorialization through black ink and charcoal drawings on brightly painted grounds, using the palette of highway warning signs as if to grab our attention. On closer inspection, the viewer is rewarded with works of remarkable detail and poignant emptiness. No people, soldiers or civilians, inhabit these haunted landscapes where scores of Americans were maimed and killed. The battle of Gettysburg was the costliest of the entire war as well as the deadliest battle in U.S. history, with approximately fifty-thousand casualties suffered across both sides.

Almost immediately after the conclusion of the battle in 1863, the Gettysburg battlefield became a place of pilgrimage, attracting throngs of visitors. Images of the site, from photographs to paintings, and prints to postcards, have played a significant role in promoting Gettysburg’s touristic appeal. Mahosky’s drawings of the battlefield reflect this image economy—revealing how Americans have consumed images of the battlefield over time—as well as the artist’s own subjectivity.

Mahosky’s influences range from the historical to the mundane, from the art museum to the souvenir shop. The washy grounds of The Yellow Drawings reference the ambrotype emulsions of Civil War photography. Mahosky has been a diligent student of the various permutations of modernist abstraction, which filter into the Gettysburg drawings as well, especially in the drawn borders that frame the battlefield images. We can recognize a distillation of the history of abstraction, including Cubism and Constructivism, as well as the decorative flourishes of Secessionism. Paying homage to the Gettysburg battlefield’s tacky, tourist trap shops and wax museums of his youth (now largely gone), The Yellow Drawings bring to mind the fake parchment paper of the countless facsimiles of Lincoln’s Gettysburg Address which were sold at such establishments.

Mahosky’s long-term engagement with the Gettysburg battlefield reached its zenith in the summer of 2015 when he was a resident artist with the National Park Service, which administers the sprawling site. There he spent most of his time drawing the battlefield en plein air. One drawing in the exhibition takes Mahosky’s residency as subject itself: a drawing in the process of being realized sits on an easel in the yard of an old house, the artist absent from the image. This structure was once the home of the Klingle family, who, on this site, nursed wounded Confederates during the early stages of the battle, eventually evacuating their farm and home, only to return to devastation with Confederate dead beneath the porch, bullet holes pockmarking the exterior, and signs of sniping positions inside their home. Now restored to its pre-war appearance, it was where Mahosky stayed during his 2015 residency.

The presentation of this body of work is especially timely as our nation appears more divided than it has been in decades. The Civil War has re-entered the public consciousness due to recent events that challenge the racism long associated with the symbols of the Confederacy: the dismantling of Confederate monuments in several Southern cities and the removal of the Confederate flag from public buildings in South Carolina. The elimination of these controversial symbols has been met with resistance. In August of this year, armed White Nationalist protesters clashed with counter-protesters in Charlottesville, Virginia over the proposed removal of a statue of Robert E. Lee, the Confederate general, leaving one counter-protester dead. 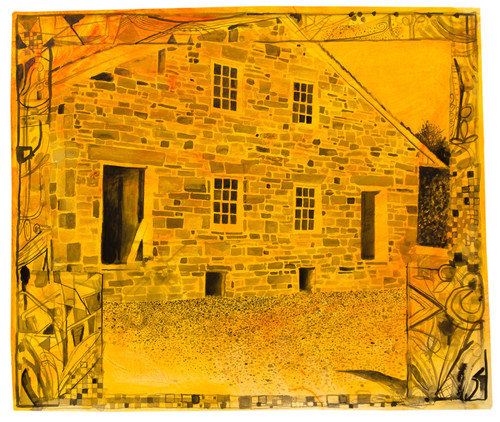