Fleisher/Ollman is delighted to announce solo exhibitions by Paul Swenbeck and Joan Nelson on view from December 15, 2011 through February 18, 2012 with a reception with the artists on December 15 from 6-8pm. In Dor and Oranur, Paul Swenbeck will present large ceramic works inspired by prehistoric fossils, plants and animals. For her first exhibition with the gallery, Joan Nelson will exhibit layered, reverse painting on glass constructions that contain secret worlds and impossible landscapes.

Joan Nelson is well known for her paintings that incorporate multiple pictorial landscape traditions and pay homage to and borrow from artists such as Albrecht Altdorfer, Albert Bierstadt, George Caleb Bingham and Casper David Friedrich. Occupying a unique place in the long history of landscape painting, Nelson's works simultaneously speak to the experience of landscape and the complexity of representation, artfully incorporating reality, memory and mediated experience.

At Fleisher/Ollman, fifteen works from a series of constructions or boxes that have never before been exhibited will be on view. Initially inspired by Salvador Dali's 1934 work, The Little Theater, Nelson began to push her paintings further into the realm of objects by exaggerating space by separating parts of the landscape onto different planes. Using the folk art tradition of reverse painting on glass, Nelson embraces the surprise and inventive nature of this technique as she depicts a cave, grove of trees, cold stream or lush field. Each work is comprised of up to six layers of glass that are housed within a homemade wooden box, itself painted and considered. Inside the boxes, Nelson completes the dioramas by stashing various trinkets and souvenirs such as moss, rocks, sticks, glitter, toys, glass ornaments and beads, and mirrors. The resulting works are gem-like, mysterious and infinite, despite their intimate scale.

Joan Nelson (b. 1958, California) lives and works in upstate New York. Her work is included in the collections of the Museum of Modern Art and the Solomon R. Guggenheim Museum in New York; the Los Angeles County Museum of Art; the Minneapolis Museum of Art; the Hirshhorn Museum and Sculpture Garden in Washington D.C.; and the Museum of Fine Arts, Boston. 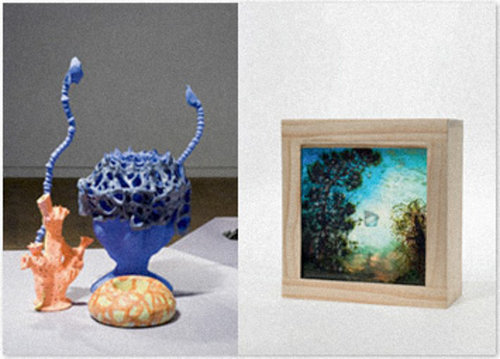